I tripped over some tweets by author John Harper, creator of Blades in the Dark, and that led me to his game, which has led me to the entire Forged in the Dark ecosystem.

So I bought Blades in the Dark. As an experiment I rand a session of it as a one-shot in a local Game Day. And it was…..amazing.

I’m a long time D&D and Savage Worlds game master, who dabbles in other games like Fate or Shadowrun looking for new ideas. I tend to prefer creating my own material, usually relying a lot on improvisation which is informed by hours of exploration and prep.

One of the challenges of playing with folks who grew up on D&D is trying to get them to own part of the process of creating story in the game. They are along for a ride created by the GM, and their input is passive until combat scenes start, at which point they activate and set about the work of using system mastery and brute force to kill the opponents arrayed before them.

That is such an ingrained pattern of play that we take for granted that this is the way things will be. Even some of the examples we might hold up of games where the players are very creative and inventive — like Critical Role (of which I’m a big fan), the players are not really driving. They don’t negotiate the story with the GM, they ask questions of the GM.

In Blades, the GM asks questions of the players.

The GM negotiates the challenges with the players, gets their help creating the scenes, and in a much more collaborative way, they build the narrative together as a shared experience, with equal attention paid scenes like investigation and social encounters as is paid to combat.

So, I like this game, and I’d really like to be able to play the game for a full campaign, but it’s a tricky fit for my current group — for reasons that are not at all related to the game or the qualities of my players. So I’m going to build a campaign I can run as a series of one-shots, where participants pick up the members of the “crew” and play them for a session, but the crew and the characters advance and move on from one one-shot to the next.

It’ll be yet another grand experiment. But that gives me something to write about and support here on my site, so let’s get going. 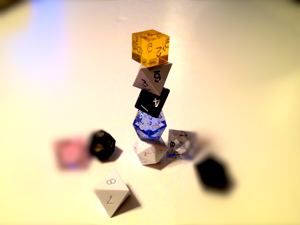 The Radiating Gnome site is coming back again. After lying fallow for a few years after getting junked up with assorted shitware, I’m going to start rebuilding from scratch.

A major focus of the site will be my gaming activities, which span several game systems.  These days I primarily run Savage Worlds, but I’m a fan of Fate, and regularly play or run Dungeons and Dragons (5e). So, as I putter around there will be content for any and all of those games.